Written by Rishabh Shrivastava Last Updated May 3, 2022 in Categories Barbells 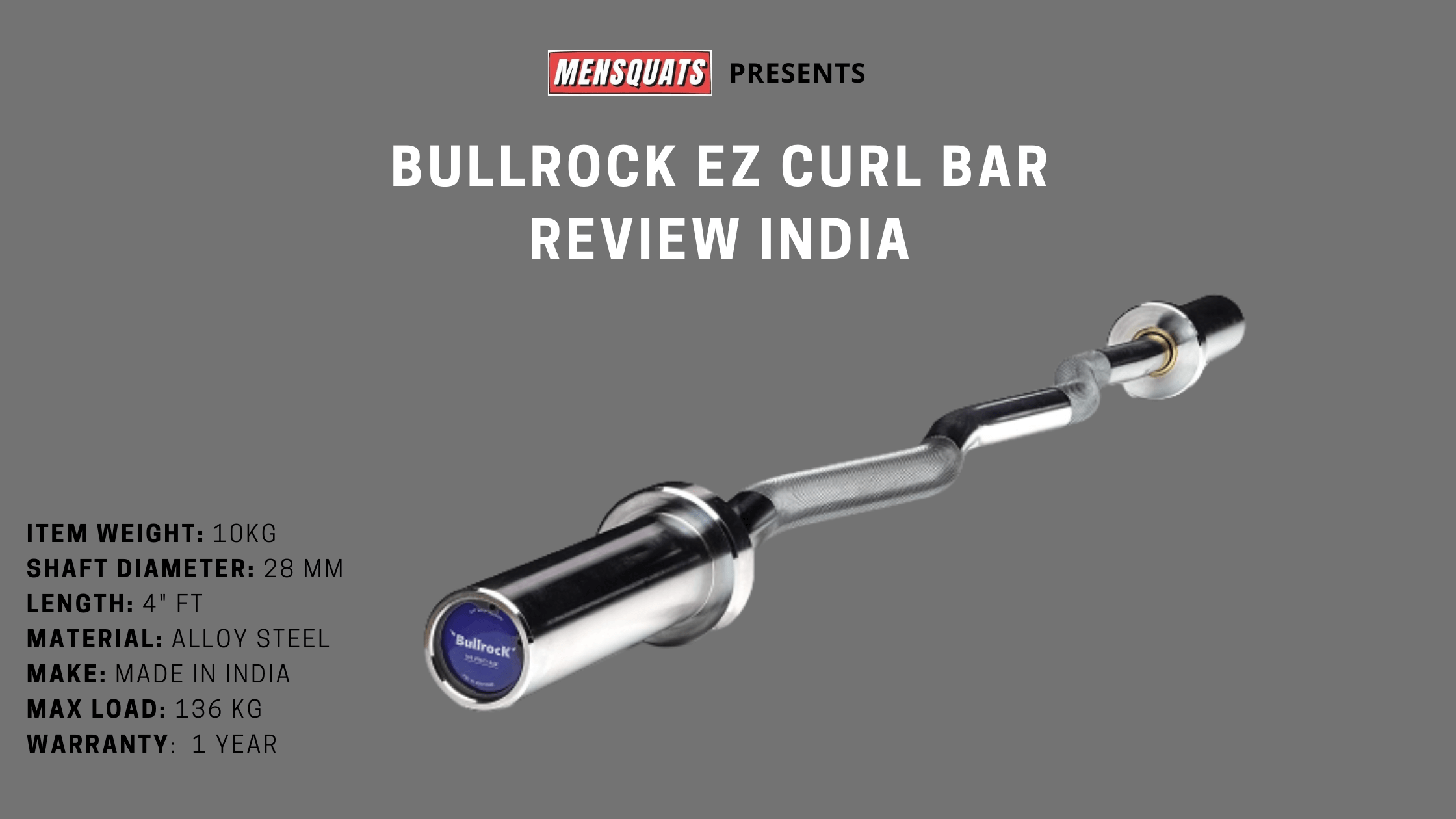 Please Share if You Found it Helpful!
2
Shares
Table Of Contents

This EZ curl bar is special because it is avilable in complete chrome coating. That means not only is the shaft completely built of chrome coating/ finishing but so are the sleeves, something that up until a couple of years ago wasn’t really anybody did in an Olympic bar, let alone in an EZ curl bar.

This is my favorite curl bar in India that’s on the market not only because it’s chrome on both the shaft and sleeves but also because the 1.2mm diamond knurl provides a good and solid grip at a price no one offers.

Everything about it is just nice.❤️

👉 In this Bullrock best EZ curl bar in India review, I’ll go over all of the bar’s specifications, talk about how it feels and performs, and compare it to other curl bars along the way. 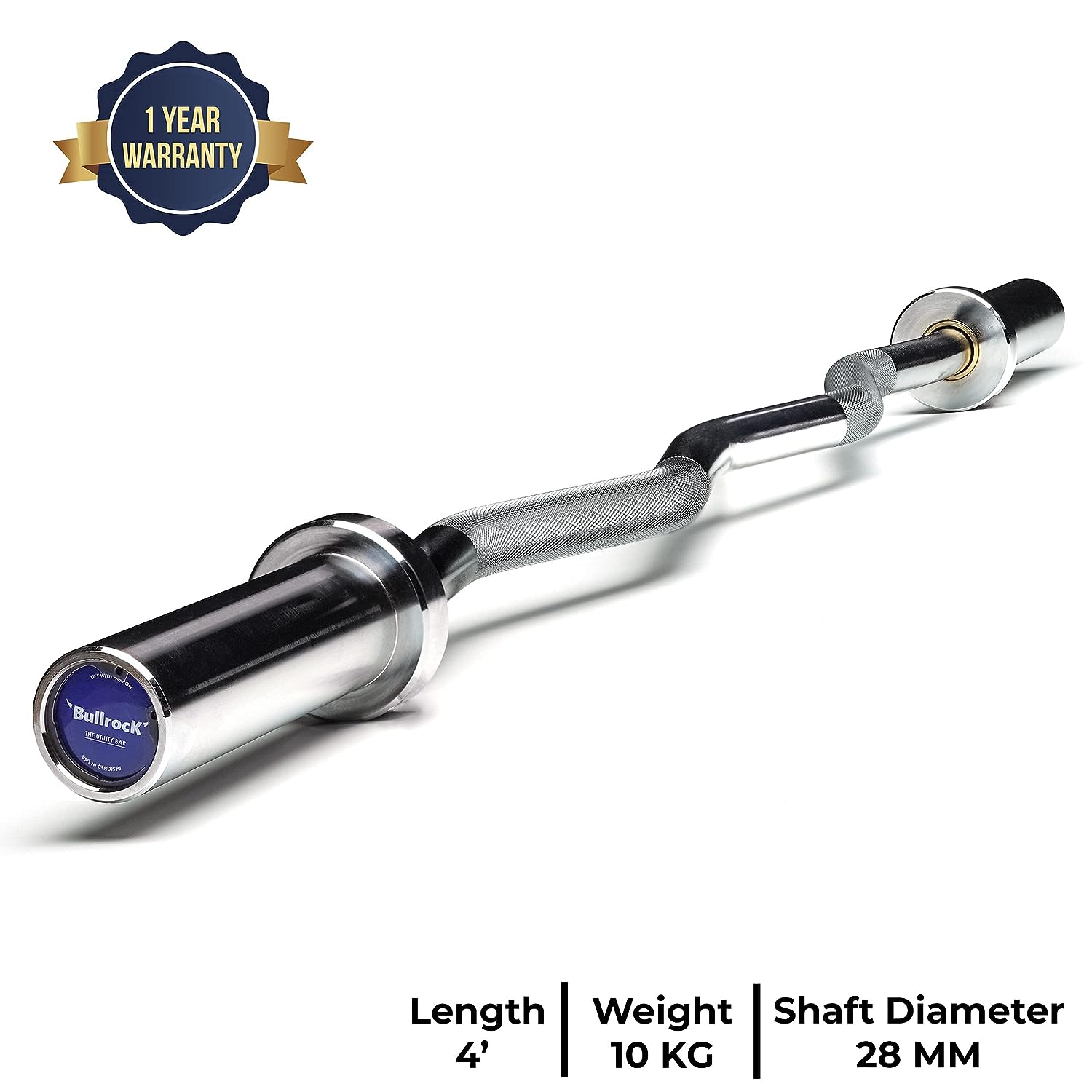 Other Models Available From Bullrock –

✔️ Good for: If you love seeing your biceps bulging and want to train them from every angle for a maximum effect try investing in an EZ curl bar, along with a bullrock 5 ft straight bar.

After this, read our SUPER-guide explaining ABC of barbells:

To understand which is best, curl bar vs straight bar first we have to know what the biceps actually do?

There are two main functions of the biceps but a lot of us only seem to remember one of them is the flexing of the forearm.

That’s why every bicep curl involves this motion, but what’s the other thing that the biceps do well? ⬇️

👉 They actually help supinate the forearm.

So if we take this information and apply it to other exercises it’s very easy to see that when utilizing an exercise like a barbell bicep curl you’re not only flexing the elbow joint to perform the movement but your arms are stuck in the supinated position which means we’re getting maximum bicep engagement throughout the entire range of motion.

And when you use an EZ curl bar, because the EZ curl bar obviously has the different grooves in it, it allows us to grab the barbell in such a way that our hands can be slightly turned inwards.

👉 This way you’re sacrificing one of the main movements that the bicep does which is the supination of the forearms.

➡️ Then why do people go for this exercise?

Well, the main reason is that some people have too much tightness in their wrists that it starts to hurt keeping their hands supinated the entire time and the EZ curl bar can help alleviate that pain.

My suggestion to you: If you don’t have wrist pain and you can handle doing straight bicep curls there’s no need to incorporate both into your routine. Stick with the one that gets the most biceps engagement which is the straight bar.

⬇️ However if you start to get pain in your wrist I recommend utilizing the EZ curl bar while working on your flexibility and then once your flexibility gets to a point where you can handle the straight bar switch over to that.

🔊 It helps take some of the stress off your wrists and elbows and as part of that, you can do it for bicep curls, for triceps, or whatever other freaky exercises you want to get.

Let me go over some of the specs.

➡️ Then one thing I will say about the design of Bullrock EZ curl bar is that I do like is the fact that in the middle it’s kind of pointed up so when I do skull Crushers I’m still gonna keep on curling.

It actually kind of fits nicely right on your skull.

Instead of where most EZ curl bars have a straight bar (no camber) in the middle, but again the downside is I do think it makes the narrow grip even more narrow than what you typically see.

Comparison With Competition in India

If you’re confused between bullrock EZ curl bar vs straight bar, which to buy?

Refer to this comparison infographic below.

Should You Buy It?

It was one of the first EZ curl bars that were available for most home gym owners, sure there are some like that have been out for a little bit from companies that are a lot more expensive but this was one that was priced really well.😍
Buy Now

➡️ In my opinion, Bullrock best EZ curl bar in India is a better overall curl bar than any other bar on amazon and it’s also using an awesome knurl pattern. Not passive or anything which slips from hands.

Everything about them is nice.

You can get this one in either a black oxide coating for Rs 8949, In comparison LEEWAY black powder-coated bars are like Rs 4000 cheaper and the shipping is all included, but mind it is of inferior quality and also their description is misleading.

So for most people that are wanting a premium curl bar if you’re gonna spend that much I would say Bullrock fitness is actually superior.

👉 That’s the Bullrock Fitness “Best EZ curl bar to buy in India” Full Review. If you have more questions about this curl bar let me know in the comment section below.

Also read our other Top-ranking blogs: