The Flexnest FlexBike & Dumbbells are 20% Off for a limited time!
Skip to content 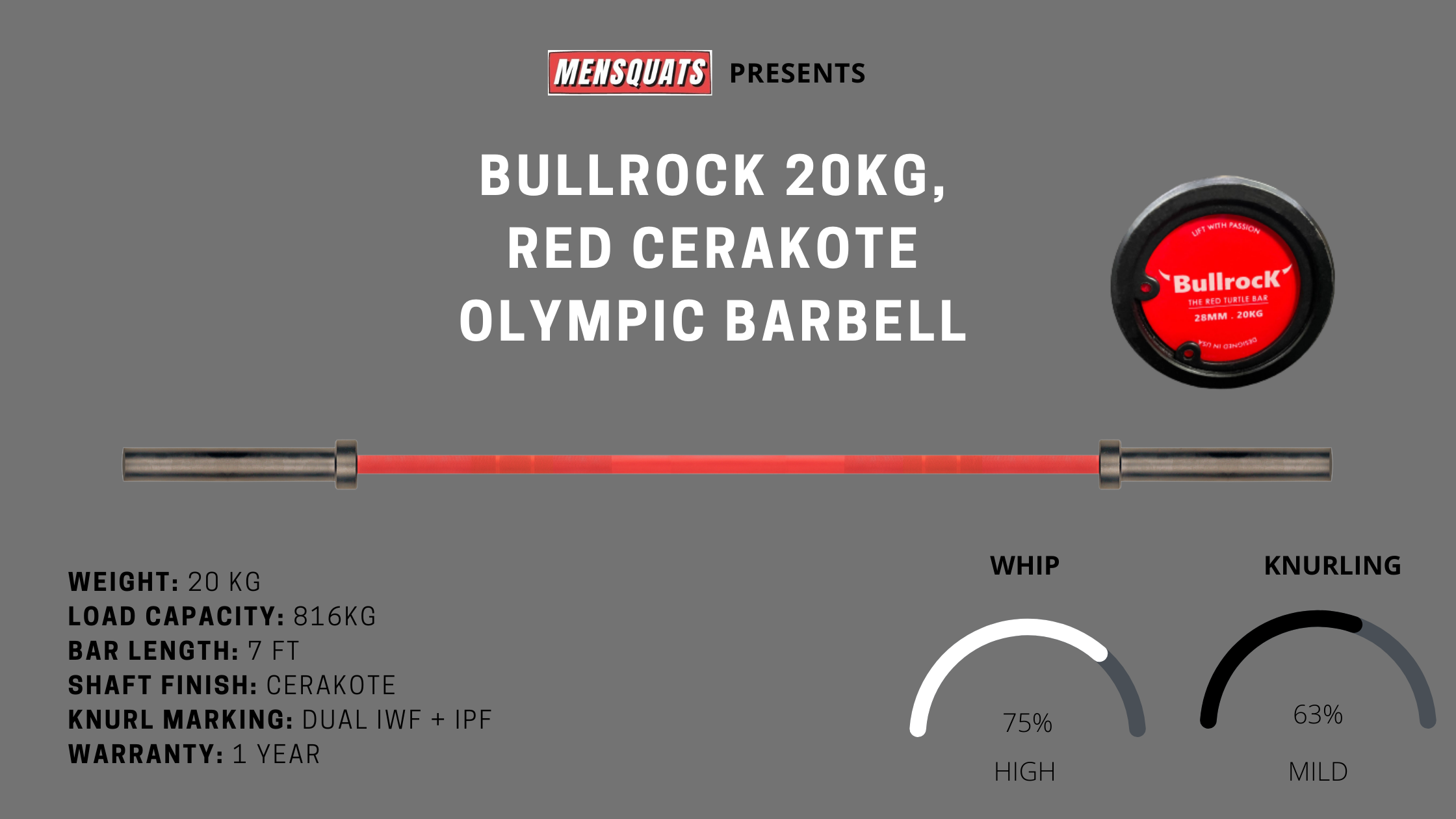 Please Share if You Found it Helpful!
3
Shares
Table Of Contents

This new cerakote bar is stronger, resilient, and flashier than all other barbells, but still, the cerakote barbell didn’t get much limelight since Rogue in 2017 came out with their first cerakote bars and the lifting community gave it good attention. 😀

But Rogue didn’t spearhead it in India. The bullrock barbells noticed a good thing and jumped on it.

It’s easy to see why you don’t see very many bright red barbells, let alone cerakote versions of it, especially for the price that Bullrock Fitness India charges for this.

In this Bullrock Red Turtle Barbell Review, I am going to address why cerakote coating is better than any other barbell coatings. We will talk about what’s different, which is better, and whether a cerakote Olympic barbell is best for you or not? After other flashier barbells that have some coating on them, like

So here I want to give you a review as a weightlifter. I say that because if you take a look at this barbell and the specs behind it I would really classify this as an Olympic weightlifting bar that has miles on it of any bar in the gym. 😀

Cerakote or ceramic coating has been around for a while. It is used most often on firearms and is used in many of the harshest environments in the world because of its hardness and durability, but even more so of its corrosion resistance. Nothing gets through it. 😅

Because cerakote is used on the weapons, you get military-grade protection with barbells that have a cerakote coating.

Moreover, it feels like there’s a slight layer of permanent chalk that’s applied to the steel.

Cerakote is good for many things and it’s not the fancy color or pattern it can be applied with – it’s important because the ceramic coating resists corrosion better than all the other barbells, except perhaps for stainless steel (which is a kind of material, and not a coating).

Check the below image to know the coating & tensile strength of the different barbells.

Why does it make sense to buy a cerakote barbell?

Environment: If you live in a humid environment, then the extra cost of buying a cerakote barbell, compared to a bare steel bar, is going to be a no-brainer.

So if you don’t want your bar to rust, then you’re must have to go only with the best cerakote barbell, or the stainless steel, or the budgetary priced hard chrome bar like Bullrock Wild Rhino Power bar. 😀

But on the contrary, if you live in a dry climate, then I don’t really see the benefit of the stainless steel bar or the cerakote bar, unless you plan on leaving your barbell outside for some reason. ➡️Dimensions: Starting with the specifics of the bullrock barbell, the shaft you get is of 28 mm diameter, weight 20 kg, and 2200 mm in length. That is of the same features as pretty much all the 28-millimeter barbells that are in Bullrock fitness barbell lineup.

➡️ Shaft & sleeve: The shaft is made of high-grade alloy steel and the sleeve has snap ring construction. It is capable of 210K psi tensile strength which provides a good whip to the bar on max loads. 😀 You get a high-quality 8 NK needle bearing (4 per sleeve), made from high-quality small needles that roll within the sleeve, and 2 bushing that provides it with smooth spin.

➡️ Knurl: This cerakote Olympic bar has dual knurl marks i.e., IPF + IWF, with no center knurl. You get a 1.2 mm diamond knurl, which is a slightly less aggressive knurl type for comfortable gripping.

➡️ Coating: There is a unique polymer ceramic composite coating/ or cerakote on the barbell, offering up to 100x the corrosion resistance of standard black phosphate. Now, unlike the other cerakote barbells that are on the market, Bullrock India uses 2 coat layers of the same cerakote coating to cover the entire barbell from sleeve to shaft. This coating will ensure that the barbell remains in a pristine-looking condition for a long time.

➡️ Feeling when holding a bar: If you’ve never used a cerakote barbell before, the feeling is way more matte compared to their glossy or zinc counterparts. Though you may see some scratches. Metal to cerakote does not mix well. But the shaft itself is where it shines as it’s the place where sweat, skin, and chalk will go.✌️

➡️ Warranty information: The barbell isn’t meant to exchange on a year-to-year basis. You get a 1-year warranty against manufacturing defects and a lifetime warranty against bending. You just have to maintain the condition of the barbell, clean it from time to time and you’ll be good with them. 💖

When you take a look at the actual knurling of bar, it’s not very aggressive. This makes it ideal for weightlifting settings. It’s also doesn’t have a center knurl, which is important for people doing front squat or cleans because when you spend a lot of time in a front rack position, you don’t want that aggressive knurling digging in your collar bone.

Surprisingly, it does have powerlifting IPF knurl marks but obviously; it has weightlifting IWF no marks as well, and perhaps one of the most interesting features on it is in the sleeves. It actually uses bearings instead of bushings.

The people who don’t know the difference must check this blog on 👉  How to choose the best barbell. But the general rule of thumb is for weightlifting: you want bearings because it allows for less friction and smoother spins.

They are really great for the faster lifts versus bushings which can still provide some great spins, but it’s geared more towards slower lifting.

✔️ Another thing about the Bullrock red turtle cerakote bar is its matte finish holds chalk really well. It doesn’t get slippery like zinc does. The real reason you should be looking into buying a cerakote barbell is because of its corrosion resistance property. It’s going to last much longer than a typical zinc coating barbell.

Thus, it will not rust as fast as a zinc bar will, or a chrome bar. But the stainless steel barbell is still going to be my top pick, as far as corrosion resistance. But shortly after that, it’s going to be the cerakote barbell.🏋️

I definitely want to see someone using Bullrock cerakote bar as a full-time bar if they liked to follow a lot of different disciplines, I say that because if you’re simply focused on powerlifting I don’t think this is the best barbell for you and that’s for a couple of reasons:

👉 So if you’re in the market for an all-around cerakote barbell, which kind of does a little of everything. This is really something you should consider, especially if you just want to get into the cerakote game or if you’re interested in picking up weightlifting and want a weightlifting specific bar because this as a power bar is LESS ideal for serious powerlifters. ❌

I can’t really understand or undersell this one, is the fact that it’s an affordable bar, but it came probably with the best packaging you would ever see for any barbell. Even which retail for about three times as much as this particular one does.

So when it is shipped to you, it will be in its normal cardboard tube, as all bars do. But in this case, it used screws to attach a very heavy and thick end cap, which was nice to see. Because dealing with a bunch of staples, a bunch of tapes, and a bunch of thin plastic would lead the barbell to break either in shipping or trying to take the bar out of the packaging itself.

Here you get four screws per side, a very thick well-secured end cap. It actually took about 5 minutes to get the bar out as opposed to literally usually taking around 20 minutes and anyone who’s had to pry staples or tape or those cheesy little end caps off or try to peel the barbell.

You know it can take a lot of time to do that and it’s very frustrating to experience. 😅

This was the easiest bar to unpack and, again, the most nicely packaged. Once you open it, you have it in a bag which is supposed to help fight corrosion and rust. ✌️

I say that because I’ve also had barbells that show up to me rusted already, even though they’re supposedly brand new. Chances are they were sitting in a warehouse somewhere or in transit, they are exposed to conditions that led to some of those issues. ➡️ But bullrock barbells do it nicely.

Bullrock Fitness cerakote bars are arguably the most popular barbells on the market and that is for good reason it’s because they are just good at everything. When it comes to performance, the bullrock olympic barbells in India make some of the best all-around barbells.

They’re probably the best CrossFit barbell, best multi-use barbell. You can use them for deadlifting, bench press, any kind of Olympic weightlifting, and pretty much anything you throw at them.

I would recommend the Bullrock’s Red Turtle Bar – Best cerakote Olympic barbell in India, if you’re in the market for a bar that kind of does it all but isn’t geared specifically towards powerlifting.

And I really say that when you consider the price of this barbell which is retailed for Rs 28000 (approx on amazon) and when you take a look at the market for best cerakote barbell in India, I believe that’s probably one of the cheapest if not the cheapest but most affordable bar out there. 💖

Hopefully, this blog on “Bullrock Red Turtle Bar Review” has helped answer some questions. If you have other ones let me know in the comment section below.

1. How To Pick Best Safety Squat Bar? 5 Things You Must Check Before.

2. Specialty Squat Bar: Do You Really Need It? This Will Help You Decide!