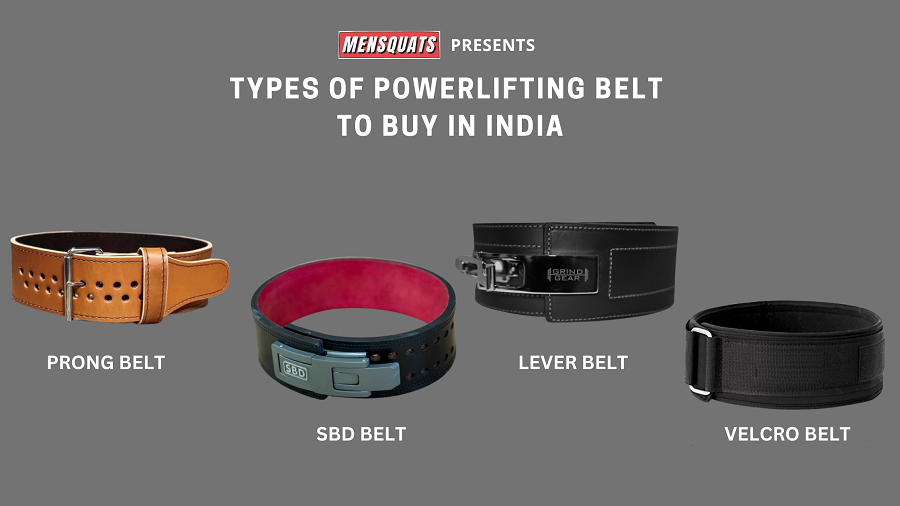 Why a powerlifting belt?

There are many of you screaming at this blog that you don’t need a powerlifting belt you just need a strong back and to those gym-hard OHS out there. I have to admit there is a lot of truth to that in reality you shouldn’t be relying heavily on a powerlifting belt.

🔥 Overall, you want to be focusing on really good form when you are lifting and during your training routines.

You really want to incorporate a lot of core exercises to strengthen your Abs and that lower back that is going to eventually help prevent injury much better than a powerlifting belt/ or weightlifting belt will do. ✨

However, there are a lot of you out there that are lifting extremely heavy like 1 Rep 2 Rep MAX very often. Or like me, you have a pre-existing back injury and you are looking to still kind of train hard at the gym but you don’t want to hit snap City. 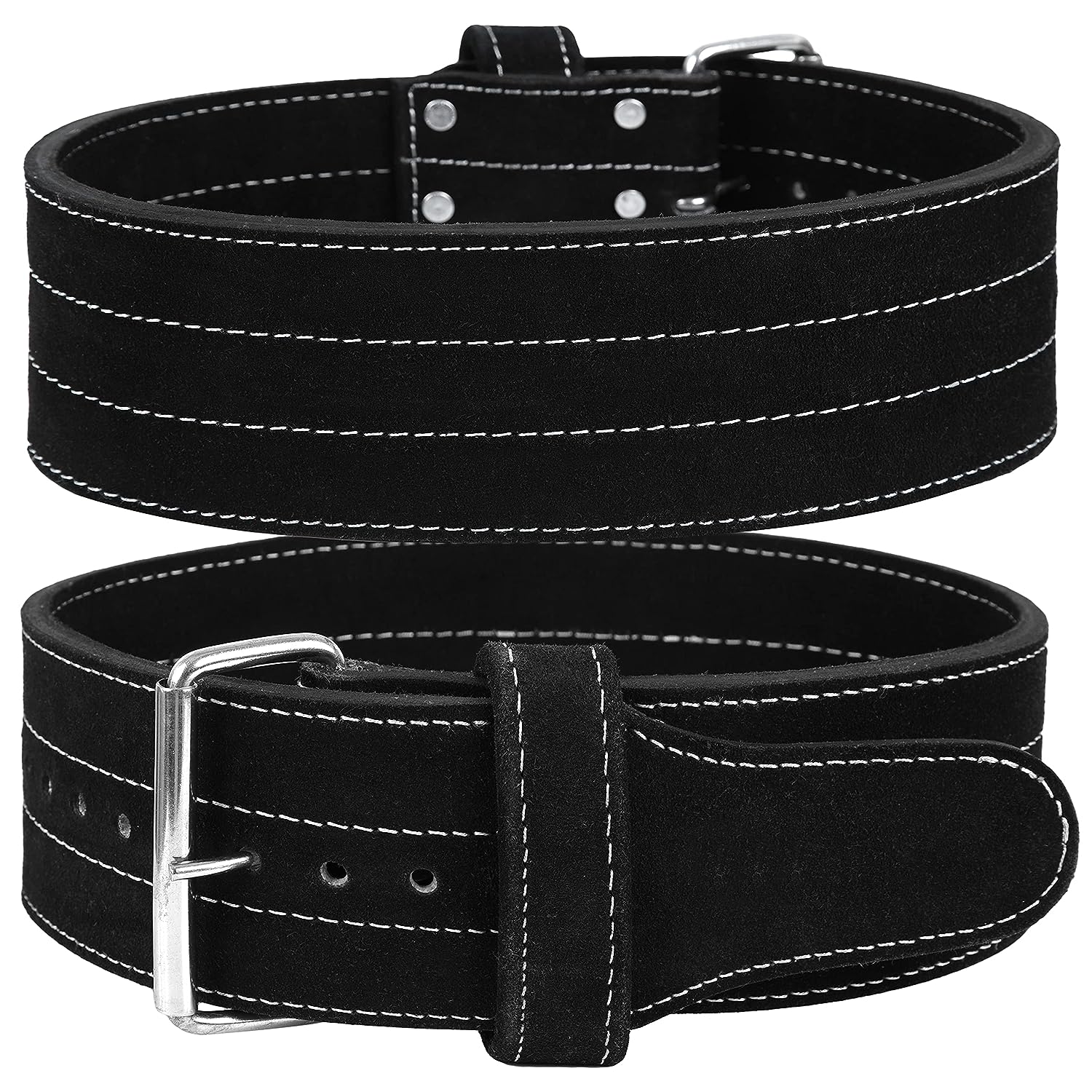 ➡️ This is the most standard belt you’ll find.

This is called a single-prong belt because there is a single male end at the front and multiple female holes on the other end. A lot of options to stick your prong into.

✔️ A belt like this is great for many people because it’s super easy to get on in terms of you just put it around your waist, and you pull it as tight as you want to fit. Stick the prong in the corresponding hole, tuck the excess belt in and you’re good to go. 😊

So if you don’t really care about these fancy things and want to get the best fit possible on your belt, something like this is going to be fine for the majority of people out there.

However, there are a couple of things with this style of belt that I DON”T LIKE: 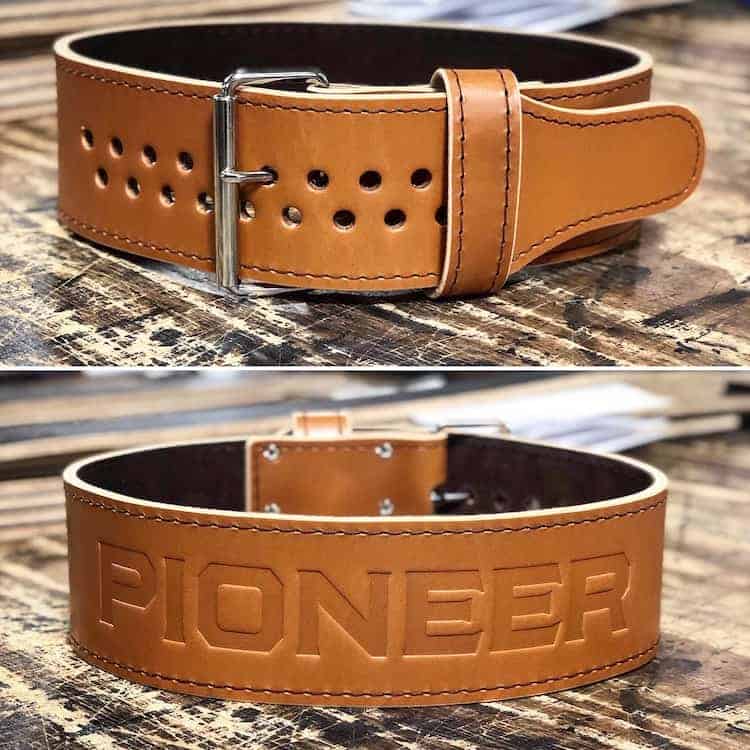 Let’s move on to another style of powerlifting belt.

This is still a prong-style belt, so you still have the single male end on this end and you have multiple female holes on the other. But in this case, you’re now dealing with 2 sets of holes which are offset, so this is called a Pioneer cut belt.

It’s easier to get a tighter fit with the pioneer cut belt because you’re dealing with smaller whole spacing increments.

And when you’re in the nitty-gritty of trying to cinch this belt super tight instead of working for that extra inch, you only have to work for an extra 0.5 inch, so less work for me to get it in which usually I appreciate.

The downside of this Pioneer cut belt is 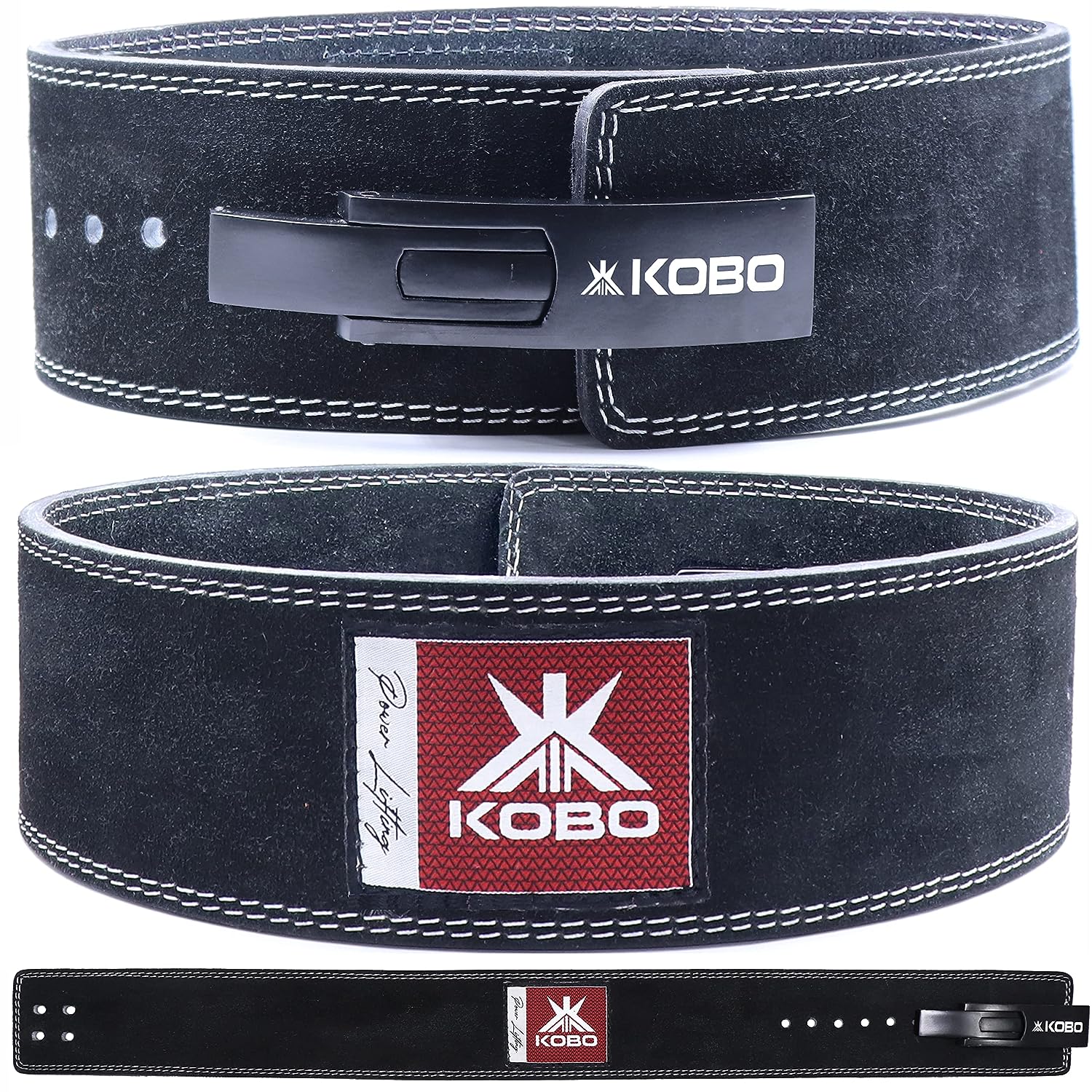 This is what I would consider. ❤️

On a standard lever belt, you have a lever on 1 end, and 4 teeth on the male end. This actual lever mounts the belt using a backing plate and 2 screws which go somewhere along this row of holes, which is also 1-inch on the centre. The female end you only have one option here.

In the prong-style belt, we talked about 1 male to potentially a lot of females. You don’t know where you want your fit to get in; you have options there. In this case, you have 1 male end as mentioned and 1 female end you’re committing.

This is like getting married. You’re marrying where this belt is going to fit you, but putting it on is really easy, taking it off is really easy, and you know what to expect with this.

It’s like you’re marrying this fit. ✔️ You know exactly how it’s going to feel every single time, which is great because again with the lever using the leverage on it. Simple on simple off.

💫 This is great because you don’t find your weight fluctuating. A lot of you don’t find that you like to wear your belt in different positions or different levels of tightness. You want the same thing over and over again.

This is the style of belt for you, however, where this belt can really falter is if you want some adjustability options, because the only way to really go about it is to take a screwdriver, take this back plate off and then move the entire lever.

One thing I also like about this lever belt is that when this belt is on and it is overlapping. I find this belt to feel better about bracing for me because I don’t have that same gap that I have on a prong-style belt, but again that’s more just personal preference. Basically similar to what we’ve already talked about. You have one male and one female end at the other end. In this case, we’re not dealing with holes on the female end. We’re dealing with teeth, so this has some bite to it and the lever-style design is just a tad bit different.

But it still connects to the Belt. The two screws, a backing plate and a row of holes 1-inch on Center.

The nice thing about this is it gives you a little of options, meaning that these teeth can then go into one of probably about 5 different positions, each one about a 0.5-inch difference.

You have about 2.5 inches of adjustability, so not a lot, but just enough to feel it and for me, this is one belt that can be your/ my daily driver because I usually like a tighter cinch on a squat versus a deadlift.

So I’ll change the position slightly or if I find that I’m just heavy one day or lighter one day I can adjust as needed on the Fly, which is pretty nice.

But I still get the comfort of being married to this basic position with a little bit of play so it’s like you’re married but have a little bit of fun on the side meaning that it’s easy on easy off and who doesn’t like that lever flick?

✔️ This belt is ideal for somebody who likes a little play and where they wear their belt, and how their belt fits.

❌ This belt is not ideal if you are looking to get a gym belt or share this with multiple people because they have to really be in the same kind of ballpark in terms of where this is going to fit.

Unless you want to break out a screwdriver or small coin and adjust this on the Fly which most people don’t want to do in a home environment.

Let alone a gym environment and carry around like a screwdriver or something like that in their gym bag. The SBD powerlifting belt is like a game on. Right?

Here you still have a traditional lever style up front with 4 teeth on it. But in this case, on the female end, you have a lot of other options.

You would find the holes that would really go with what you’re looking for at that particular time it bites in and then you have the benefit of a lever of again cinching that belt to where it needs to be and the ease of getting it off.

But in this case, what you get is again a lot of different options, a lot of adjustabilities, but also you get that same consistent fit. Depending on where you’re putting this and the lever really helps get it on and helps get it off.

This is like a real true hybrid of our traditional prong and a traditional lever. If they were to kind of get it on you would get this monstrosity with this huge lever on here. 🤜

❌ Now I don’t think that this is the perfect belt for me.

However, to me, the biggest downside of a belt like this is where it goes on the female end is still 1-inch hole spacing. You don’t get that fine-tuned adjustment that I really like personally from the adjustable lever belt.

However, this belt could be used more in a gym situation where multiple people are using it. Or if you’re sharing with a gym partner or you just have a very wide variance of your body type and where you like to wear your belt.

This will give you the options that the adjustable lever belt will not. 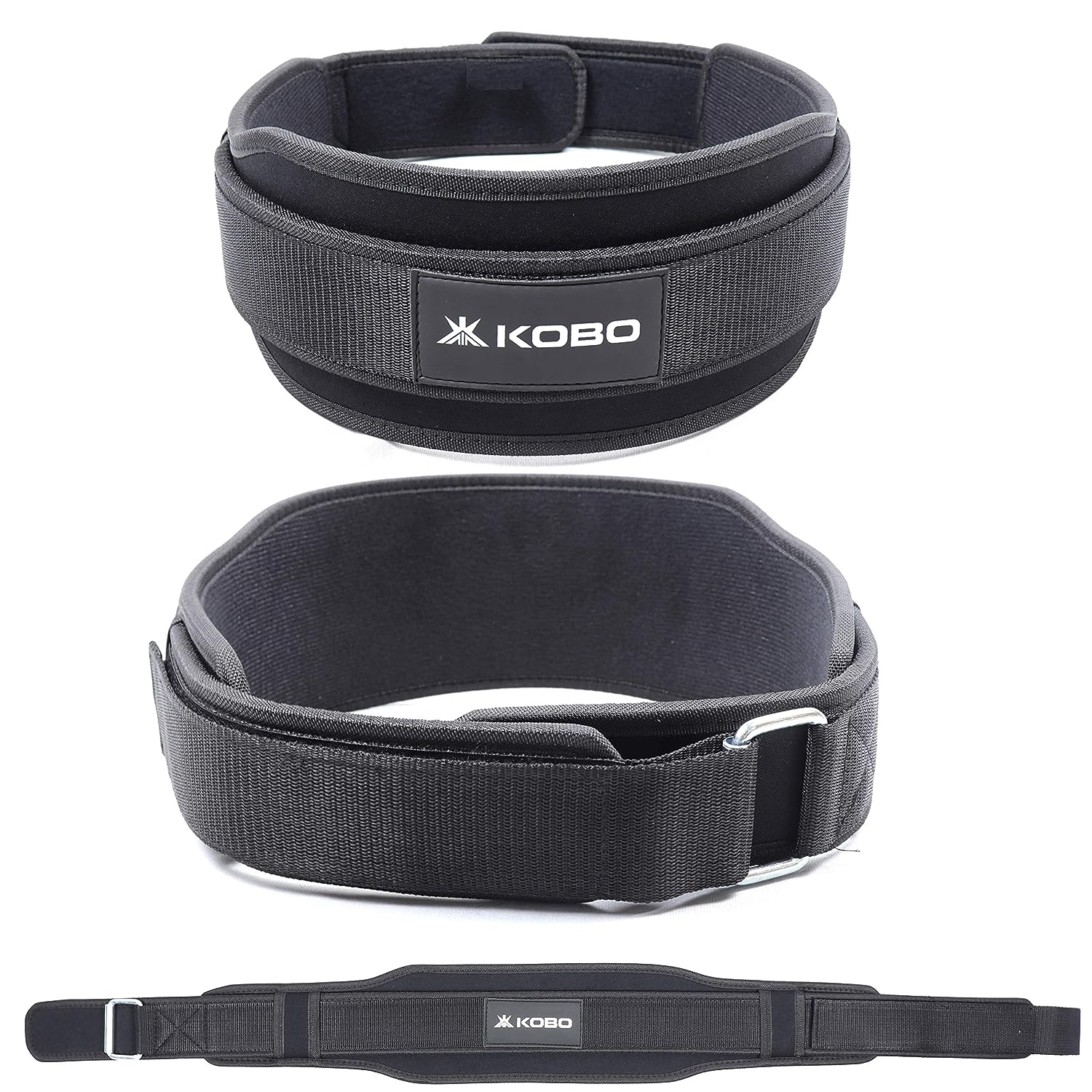 We all know how velcro works. Maybe if you have Olympic lifting shoes, there’s a buckle there that you just use as leverage to pull that as tight as possible.

It’s easy to close because you’re dealing with a wide strip of velcro in order to get into position.

🤜 Certain strongman-type lifts like log overhead press things where I basically don’t want a big bulky belt to get in the way like with the lever itself. Where I don’t want to have to work to kind of get the belt on, this is easy-on easy-off easy cinch, very low profile, which I LIKE.

➡️ However, I wouldn’t recommend it to a lot of people who are into powerlifting.

Depending on the Federation that you compete in, it might not be allowed. Chances are it’s not allowed, but also these belts are typically thinner in profile and don’t offer as much support. These belts are better for that application. This is nice.

Who doesn’t have to fully commit to a leather belt which can hurt a lot of people?

These velcro ones are much more comfortable. ✔️

Maybe you do more of a CrossFit style or maybe do Olympic weightlifting. These belts are probably a little better because they allow for a lot more movement, but just another option out there.

If I had to choose one belt, I would go with the adjustable lever from GRIND GEAR for Rs 6324, just because I train by myself I don’t find my weight fluctuates a ton and I like that micro adjustment.

And because I do like to wear my belt for slightly different tightnesses. Whether that be you know when I squat versus deadlift and so forth. But all these belts can offer some benefits to you depending on what you’re looking for.
Buy Belts!

Hope this blog “types of best powerlifting belts in India” will help answer some of those questions you may have, if it didn’t let me know which questions still remain in the comment section below. Which belt do you prefer?

Read more from my BLOGS: