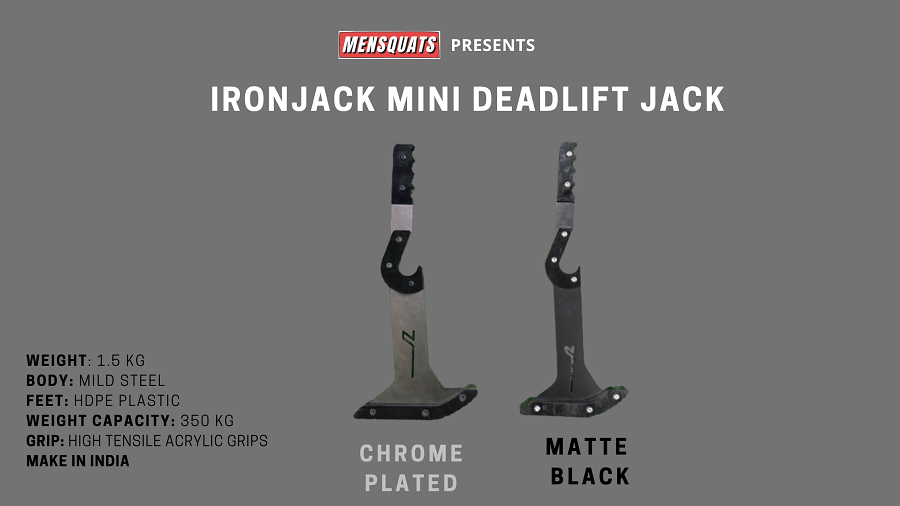 Please Share if You Found it Helpful!
2
Shares
Table Of Contents

Now, if you’re one of those who thinks that deadlift jacks somehow make you weaker, then this is definitely not for you.

If, on the other hand, you see the benefits of a deadlift jack, namely how it helps you save time and energy, then you’ll definitely want to stick around because today in this blog we’re taking a look at the newly released IronJack.❤️ ➡️ This is a new deadlift Jack alternative that’s going to try to take the place of the tried-and-true mini deadlift jack, dead wedge or everybody’s favourite change weight plate thrown under a couple of 25s, which just do the needful – change the plates for your next sets.

Now all of those options are great, neither of which are perfect, however, I think the IronJack – the best deadlift Jack in India may have solved some of these issues.

I’m really excited to try it out and let’s see if it does the job or if it’s just going to be another Jack we’re gonna have to off from our list. 😊

Ironoid is one company’s answer to the age-old problem of putting weight on the bar to deadlift.

Now as mentioned earlier we’ll likely use a change plate to do this in the past while I’ve also used a dead wedge and Bullrock Fitness mini deadlift Jack.

While those have worked they’ve also had some issues the Ironoid barbell jack is aimed at fixing those problems.

Before getting into the Ironoid Ironjack review. Here’s a very quick primer on deadlift jacks and why they’re useful. ✨

What is a deadlift bar Jack?

➡️ When you’re loading or unloading a barbell on the floor. It can be annoying doing so because of a little thing called gravity that keeps everything firmly on the ground.

A deadlift jack uses leverage to effortlessly lift the bar enough to provide clearance for plates to slide on and off without restriction. This allows you to conserve your energy for the actual lift and it makes your back feel easier after the lift.

What’s the benefit of deadlift jack?

➡️ The main benefit of this IronJack mini deadlift jack in India is the fact that it’s very lightweight. It’s very portable. If you want to throw this in a gym bag you can.

Outside of a normal mini Jack which actually gets really heavy. The fulcrum design on this allows you to easily lift weights.

This original video demonstrates how easy it is to lift weights with this particular one and this is better in some regards.

Then let’s say just throw in a 5-kg plate or something like a dead wedge under the plate because this is actually going to lift the entire weight stack off the ground which means you’ll always be able to push the weights all the way into the collar and you’re not going to get any loose or sloppy plates around. ✨

✅ This is the main benefit of Ironoid best deadlift Jack in India.

The Ironoid barbell jack is made from a strong lightweight material, 6061 aluminium which allows it to lift an extreme amount of weight while remaining light and portable.

➡️ The barbell jack itself weighs less than 2 kgs and I’m gonna go ahead and break down the design into three parts:

#1 Base of the jack: It has 3 feet for stability that curve up towards the front and ends up being 7 inches long. Now, this is the part that initially touches the ground and allows you to lift the weight back.

#2 Feet: The feet are grouped for added grip and are 2 and 1/4 inches wide; the middle foot is part of the overall handle of the jack and stands at 18 inches tall.

#3 Hook: Now about halfway up you have a UHMW hook that helps you grab onto the bar which by the way is user replaceable and the plastic not only protects the bar but the jack as well.

At the top of the handle, you have 4 grooves for easy gripping.

✅ One of the things that I really appreciate about Ironoid is that they believe in unique design and they bring a fresh perspective to the products that they build.

👉 This Mini deadlift jack is not a unique product; it’s been around for many years but the unique design of the IronJack was enough to catch the eyes of many, myself included.

Other Options To Lift A Barbell

➡️ Before I get into how the IronJack works. Let’s take a look at the other options I was using before:

➡️ The overall look of this barbell deadlift jack is pretty sweet and definitely reminds me of some sort of weapon almost like an Ice pick.

➡️ The biggest benefit of a full-size jack compared to a smaller jack is that it lifts the entire bar up versus the smaller jack only lifting one side up at a time.

👉 This speeds up the process, it removes a step altogether and it’s generally just easier to use because you don’t have to bend down at all. You can operate the entire thing just while standing.

The downside to the full deadlift jack is of course space; the smaller IronJack takes up practically no space at all. Whereas the full-size jack takes up approximately 47/3 quarters inches wide 18.5 inches deep and 31/3 quarter inches tall.

If you have the space to dedicate to it I would personally recommend the Ironoid jack because it’s just much easier to use, but the Ironoid jack is a great little jack on its own. Right!!❤️

👉 Again the Ironoid deadlift jack is substantially lighter and I find that it’s just a little bit easier to use the leverage even if it is marginal just feels a little bit better to me and while the bullrock mini deadlift jack works fine and it can handle a lot of weight I just enjoy the operation of the IronJack more.

One of the other things that Ironoid company did when they designed this relative to some of the other full-size jacks on the market was they extended their hooks to be a little bit wider with the thought that this would reduce some of the bend in the bar and over time limit some of the stress imposed on it.

➡️ Now this is going to make your bars magically perform better and last longer than they would otherwise.

Technically this could be a perceived benefit and it is something worth noting.

Their price might be a little bit high but I think the return on investment is definitely there and it’s definitely worth considering if you’re in the market for a deadlift Jack.

Is a deadlift jack something that you would favour as a budget option or are you willing to pay a little bit extra for a better product even if it’s just a deadlift jack? Let me know in the comment section down below.

Thanks for reading. Stay Strong.