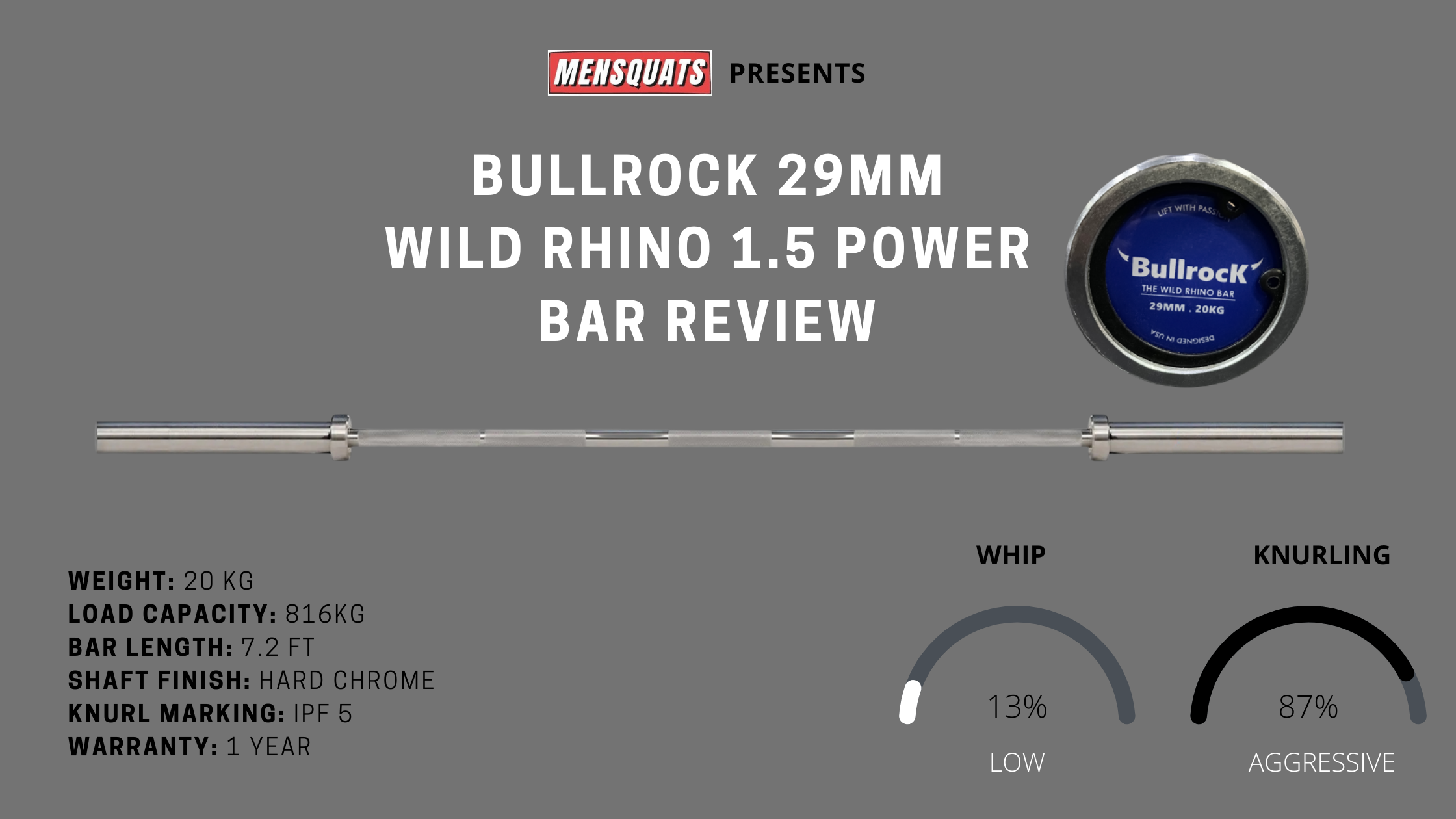 👉 This bar is a popular choice among powerlifters and others in India.

You really can keep your trust on the Bullrock Fitness or their Wild Rhino 29MM powerlifting bar, no matter which other barbell brand in India you use currently. This power bar can give a tough fight to all of them. 😊

I have in the past reviewed other bullrock bars as well, i.e., cerakote red turtle bar, and their deadlift bar which you could find out, and I think their all-strength equipment is a blend of quality and affordability that really sets it above the rest. Even when we compare it to super expensive foreign barbell brands like Rogue and Eleiko.

✔️ Given that this bar is geared more towards powerlifting and is IPF specs accepted, which is a nice thing to consider its entry in the best of best powerlifting barbells in India, at a first sight.

Though, the key thing to point out here is that it has aggressive knurling on its shaft, which for a power bar is obviously needed to have a stronger grip/ hold on the bar.

But it won’t be liked by many people or those who are starting out and experiencing such a product for the first time.😕

So for you, this might or might not fit alongside your training style if you’re not really a powerlifter. (Please don’t leave, I have another recommendation for you in the end.)

➡️ In this Bullrock Wild Rhino Powerlifting bar India review, I would be talking about what each part/ component of this barbell has, does it meet industry standards, and what would it feel like when you use it in the application.

Also, what are the other best powerlifting bar options in India for you, if not this?

Let’s get on this journey. ❤️

Who needs to buy a powerlifting bar?

👉 Buying your own powerlifting bar definitely isn’t for everybody, and also everybody shouldn’t be buying every barbell.

Barbells can get pretty expensive, depending on their specifications and the real competition feel at a steel of a price they provide.

If you’re looking for a new barbell, and if you don’t mind a little elbow grease and getting things dirty and fixing it up and maybe some inconsistencies on the knurl, then an inexpensive non-branded barbell found on amazon for Rs 10000 or low is just Okay. Whose specs don’t match to what IPF has laid out and which isn’t really a powerlifting bar.

But I’d think you’d really be hard-pressed to work with any normal barbell.

➡️ That’s the reason, through my blogs I help you find a better powerlifting bar on the market for the price and the specs that are meant for serious powerlifters.

This means you can train like a competition style and could more profoundly increase your numbers on squats, bench, and deadlifts, rather than being stunned later at the stage. 😲 As the name implies, it’s a powerlifting bar, which is meant for squatting, benching, and deadlifting all 3 major movements for which powerlifters train most for.

But the real question is whether it truly is a Wild Rhino? Let’s find out.

If you’ve been thinking about buying this best powerlifting bar in India, i.e., Wild Rhino 1.5 Power Bar. I would highly recommend it however before you do, I might also suggest looking at the Bullrock Sabertooth 29MM power bar as they’re both very similar, they have a few different variants at the finish. 😊

Though they both can’t be compared but only picked based on what coating you prefer to have, depending on the conditions you keep the barbell in, or where you live in India, and how’s the weather there?

➡️ Rest everything and all specifications, such as length, diameter, and type of knurls you get on both these powerlifting barbells from bullrock Fitness India are the SAME. Just the difference you will observe is in the Coating.

Let’s first find out which coating is better, Hard chrome or Black Oxide?

🔰 I find that it is a really stiff bar with good powerlifting bar specs and for the price of around 💲 INR 26000 post shipping on Amazon. it’s really attractive considering that you’re not paying for any expensive coating that is just for good appearance, or brand name like Eleiko, which costs almost double or triple of this price due to their excessive import duties here in India.😳 Also, not all have access to them.

This bullrock power bar, is giving you an Indian product at a price that is affordable and wouldn’t be taking too much from our pockets.

Also, it’s giving you the same kind of performance for a lot of those other bars in comparison to $500+ bars like Rogue Ohio Bar, or any of that type. Which is going to cost you more with shipping + taxes.

➡️ To be honest, you shouldn’t be buying foreign brand bars also in the case, when actually you want to have thinner-style collars on your bar, which are more akin to powerlifting.

There are plenty of options in India, and you can ask me by writing to [email protected], I will be happy to guide you.

My overall opinion on this Wild Rhino 1.5 power bar India from Bullrock Fitness, to be honest, I liked it a lot. In fact, I liked it a lot more than I thought I was going to like it, and I had no problem inserting this into my daily training routine. It just fit alongside my Nelco Olympic bar. makes

I’d mentioned some of the pros on here. I like the volcano knurling on it which makes you use it for squatting, benching, and deadlifting. The shaft diameter of 29MM make it stiff, the spin on sleeves is minimum.

A few of the quick knocks is that you do see more whip or flexion as you increase the weights compared to the other bars.

But depending on how much you lift 300+, that might not even really matter for the most part. And because it comes with IPF specs, it can’t be a deal-breaker. 😊

➡️ I do still think the Bullrock powerlifting barbells are the gold standard when it comes to both quality and price, but that being said this is a viable contender to other best powerlifting barbells in India, like ATE power bar and as I mentioned I have no problem using this on a day to day basis. ✔️

Other Recommendations For Barbell: If you want to have only a thin-collar powerlifting barbell, though I explained the difference between the two, which isn’t much a deciding factor. But still, if you want to go that way. Have this bar, which has exactly the same specs as Wild Rhino, but obviously comes with a more loadable sleeve length. 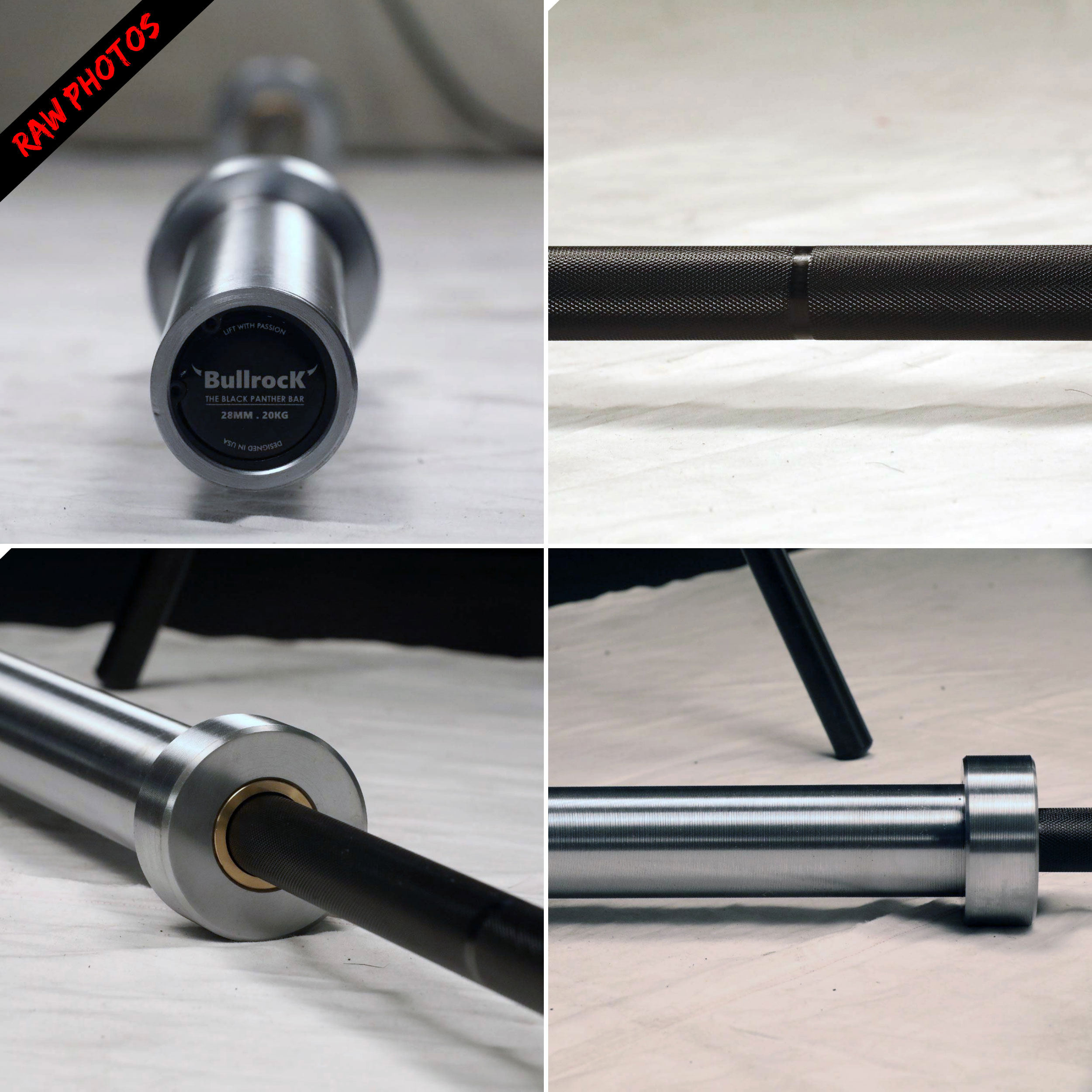 For those who don’t mind, to have an IWF + IPF knurl marks for the sake of having a mildly aggressive 1.2 diamond knurl over a volcano knurl can have a Bullrock black panther bar. This can be your all-purpose bar, with a 28MM shaft diameter and little whip.

Hopefully, that helps you make some decisions. If I left anything out or you have other questions, please let me know in the comment section below.

In the meantime, please share it with you powerlifter friends, and tell me which powerlifting barbell you have, and if not this one which?