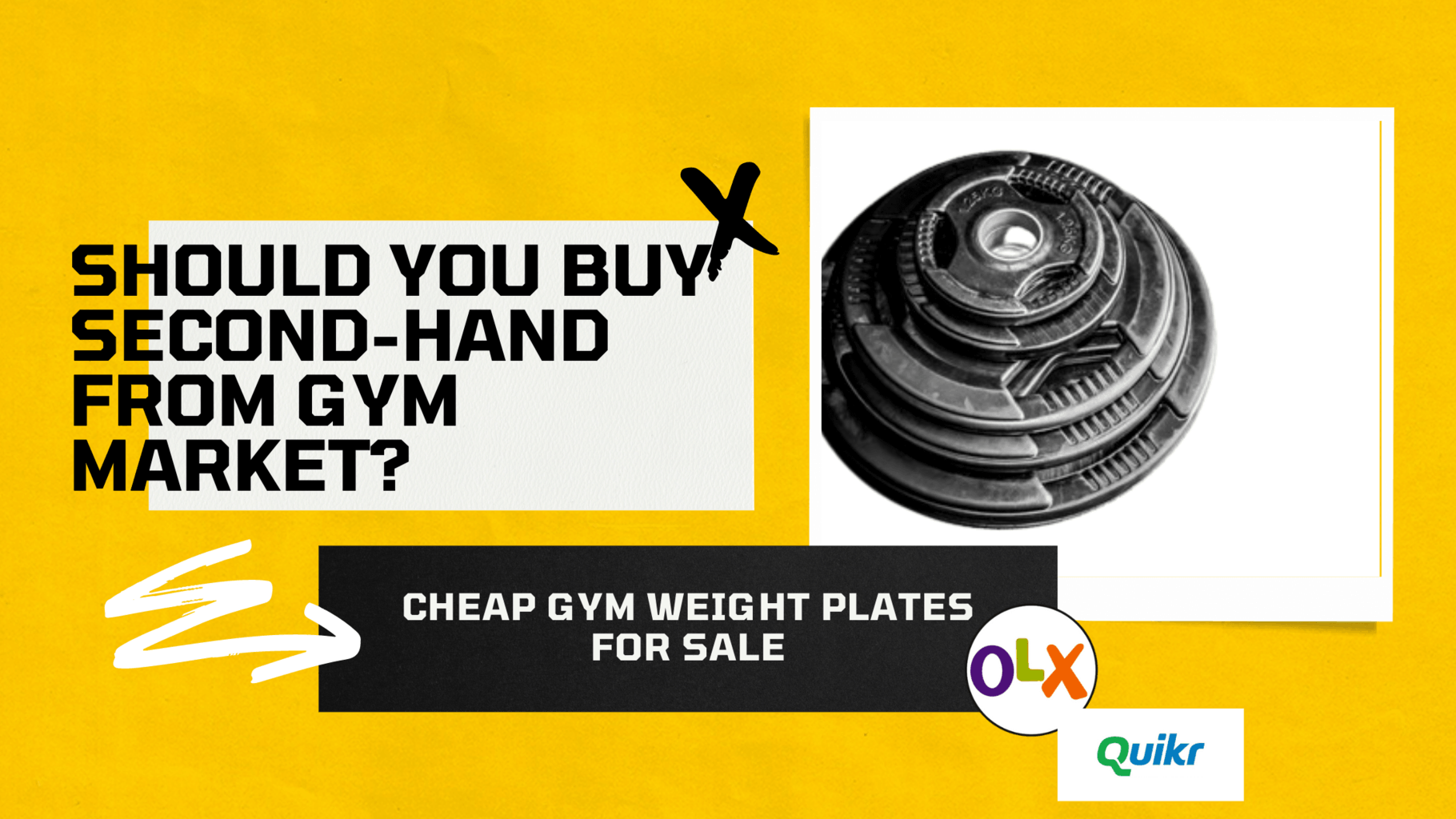 Written by Rishabh Shrivastava Last Updated May 2, 2021 in Categories Weight Plates
Disclosure: At Mensquats we want to help you navigate your fitness choices. To do this, many or all product links featured here are affiliate links, which earn us commission at no additional cost imposed from you (none whatsoever!). This doesn't influence our reviews. Our opinion are our own. 😄
Table Of Contents

Today’s topic is of picking second hand gym weight plates for home gym, I want to talk about the used or secondhand market which to be honest I think is the best way for most people to go if you’re starting a home gym.💪

Even though I think that way, it doesn’t mean it is the best or only way of success because I haven’t been able to do it myself, I’ve tried a couple of times it just hasn’t happened for me just yet. It’s also tough because it really depends on- 👀Where you are and when you look?

Being real, I am not a believer in always recommending expensive home gym equipment to my audience. Otherwise, I can just say hey if you want this here’s the website, here’s how much it’s going to cost you and that be consistent for everyone reading this blog.

Instead, with the second-hand market🗺️, it really depends on when you look and where you’re located.

What equipment should be bought from the second hand gym market?

Right well for the most part with weight plates, the reason I push you to the second market, in this case, is that gym weights are one of the few gym equipment items where the quality and the price kind of are in line and you’re not sacrificing quality for a cheap price. 💰

Whereas if you’re buying an Olympic barbell second hand you might be sacrificing even if the bar is straight if the knurling is intact if the sleeves still spin but it’s rusted if the plating is coming off.

Similarly, if you’re buying a weight bench, maybe the pad is worn or torn or it doesn’t incline or decline how it should. If you’re buying a gym rack, maybe it’s beaten up or doesn’t come with all the accessories and you sacrificing some quality in terms of getting a better price. 🔰

🛒But for second hand gym weight plates I think it’s one of the few where most people would probably agree on weights that look of the used and used look better, and since there are no real moving parts you’re not sacrificing any quality issues on here.

I still hold to, “Weight isn’t necessarily a weight” and you must be buying from different types of weight plates, may it be rubber bumper plates, iron plates, or calibrated plates if it fits your lifting needs and gym setup.

Which I have discussed much in detail in my Weight Plates Guide here.🔗 Read it after finishing here.

So that being said though, most people still are going to benefit from going secondhand with weight plates. Why❓

So a lot of money that you’ll never really get back on your investment instead let someone who buys new eat all that up and then you get to reap the benefits of buying all at a discount.

What to look at in used weight plates for sale?

Even though there’s a lot of cheap and inexpensive used weight plates for sale found online, you still want to make sure that they’re of

📢The nice thing about the second hand gym market is it’s a hodgepodge of everything out there you can get some extremely nice weight plates at an extremely low cost but again you have to dig⛏️ and look and be persistent about looking to see what’s near you or even be willing to travel a little bit.

But the price savings can be huge where you can turn around and spend that money on other things like buying New Gym Racks and Barbells and other gym equipment as well, so that’s one of the things that I want to point out.

Advantages you get when you pick up locally?

🏷️Prices by far and away, the best also because you’re picking up locally in most cases or secondhand like I said you’re going to go to someone’s house and get these weights.

You could bring a scale in theory and weigh the plates before you commit to buying them to make sure that again those weight plates fit within the tolerances📏 of weight that you are comfortable with.

Meaning that you’re going to buy 45-pound plates you can ensure that there are as close to 45 pounds as possible and if they’re not, you can either say you’re not going to buy those particular ones that way.

Or either more or less use that as a bargaining technique🚀 to get the price even lower.

How to get a better DEAL from the second hand gym market?

Another good thing about buying second hand is the fact that there is some haggling involved here like if you like Challenge, Performer power bar you can’t go to them and say — You know what that’s a nice bar I’ll give you Rs 1000 less than you’re asking for it. Would you sell?😀

They’re not going to respond to you in that case but on the second-hand market, all prices are fair game now it’s true the seller doesn’t have to accept but you can usually work people down from their initial asking price or bundle items together to get better discounts 🈹

Depending on what you have available in your home gym and are looking to flip stuff, you might find something that you can trade in exchange for what that seller has instead.

So there’s a lot more flexibility and how to get stuff and of course, it always comes usually at a lower price and you can get some really good deals on used weight plates that you can 🧽 clean up and restore.

In fact, there’s a whole subreddit to them that does a lot of that there are some videos on YouTube showing you how and I would like to do that as well.

Pick up some old vintage plates, 👵 and clean them and restore them, but that brings me to probably one of my biggest issues with buying secondhand.

What Are The Issues In Buying Used Gym Weight Plates?

1) You don’t ever really know what’s out there? That means it depends on when you look and where you look. For me personally, on this, I’ve always wanted to go out and get a certain type, style, or colour weight plates🎆, I would go and look 🔎 and I could never really find what I was looking for.

So that’s going to be a big potential problem, especially if you’re as impatient as I am and if you’re waiting on just the weights in order to complete your home gym because 😕

Obviously, if you don’t have weights, you can’t lift anything outside of a bar. So also you’re going to go nowhere really fast so this could be a potential roadblock up going on with a certain weight plate in mind or styling.

2) I have to go far for searching🔎: Not finding anything close to you or finding something that ends up being further than you’re is a real pain.

You should be willing to travel like several hours each way around a trip, or maybe if it’s a desirable plate, the price point might not be attractive enough for you to go ahead and warrant that purchase.

So I’ve seen some great plates that I’ve wanted but they’re so close to buying new that didn’t make sense to buy it used or too far of a drive where it wasn’t worth my time to go out and get it so again that’s one of the most difficult things about the second-hand or used market.🥺

3) The availability and to compound on that availability: Another issue that I’ve had personally is on the type of person who likes to keep the same aesthetic with my weights meaning that if I have a certain brand, I would like to have my entire weight set be.

Buying used plates it’s kind of a Crapshoot because you could find maybe a starter set of something which includes like a pair of two and a half’s five-ten is twenty fives thirty-five and forty-fives but only a single pair of each.🙃 That means that most people are going to want multiple pairs of forty-fives but that seller might not have any available and I’ve run into the is way too many times.

Then I care to mention where I like the weight plate set but I don’t want to have to buy that and wait to order to get ones that are similar and I don’t want to mix and match with other brand plates where I’ve just decided not to go through with that purchase so that’s another thing to take into consideration. 😏

If you can get past that and you just want something for a very good price, which is local, also you’re not have to pay taxes or shipping on. Then buying secondhand again makes the most sense 🛒when you take a look at all the other equipment out there.

👍Weights are the one thing that doesn’t ever break or degrade for the most part unless you’re talking about maybe some bumpers, which if you read my last blog on Buying Weight Plate Guide🔗

Hopefully, you’re not buying bulbs anyway but you can get some great deals on some potentially great used gym plates, but you just have to look and spend your time searching.

You can easily find leads by just googling on your smartphone: second hand weight plates near me. But I have mentioned some places for your easy search below which are:

➡️These are the places where I’ve been selling most of my gym equipment and I like that the most out of everything out there offers up and let go aren’t big in my area which is the Aligarh, Uttar Pradesh area🌆 but some people have had great success with that especially if you’re near bigger cities, like Delhi.

So you just have to keep on top of things and you can find great deals out there and save tons of money if you’re patient and then reinvest and hopefully buy some other cool new gym equipment, like an Olympic barbell, adjustable dumbbells, squat stand, Gym rack, that maybe you thought was out of your price range before.😁

So hopefully this blog on second hand gym weight plates helps you.

Let me know if you have other questions, answer below: what are your feelings when you’ve bought used weight plates before? What route did you go?